Two graphite rods are placed in an electrolysis cell filled with electrolyte and a constant potential is applied between graphite electrodes using a galvanostat. The anode will corroding and black precipitate will be gradually formed in the reactor. The electrolysis will be conducted for a suitable time to obtain stable graphene dispersion with a suitable graphene concentration. For each electrolyte, the graphene structure will be studied under different electrolytic conditions, including applied voltage and time. 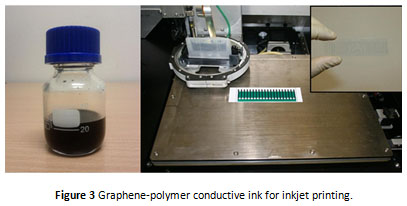 In many device applications, graphene film on insulating substrate with high uniformity over large area is essential and CVD has been shown as the most suitable mean for large-area graphene synthesis. Thin graphene layers are typically grown on various catalyst thin films such as Ni or Cu coated SiO2/Si substrate using methane as carbon source by CVD process. Since methane is an expensive carbon source that requires relatively high operating temperature, it is thus desirable to replace it with acetylene to lower synthesis temperature and cost. In this research, we study graphene growth on various catalyst thin films using acetylene (C2H2) as carbon source. The chemical structure of graphene film on the substrate will be determined using FTIR, XRD and Raman spectroscopy. In addition, its oxygen content will be measured by EDX and AES.

3D graphene will be synthesized by CVD process with the use of niclkle foam templates. In this project, we study graphene growth on various Ni foam template with different pore size and thickness using acetylene (C2H2) as carbon source. After 3D graphene growth, Ni foam will be partially or completely etched by wet etching in HCl or FeCl3 solution. 3D grahene foam structure will also be controlled by optimizing the template etching conditions (concentration, temperature and time). Finally, graphene foam will optically dried in critical point drying (CPD) system to maximize its structural integrity.

For gas sensing, graphene will be applied on interdigit electrodes (IDEs) by various methods including inkjet printing, drop coating and casting. IDEs will be prefabricated by photolithographic patterneing and thin film metal sputtering or by screen printing methods on insulating substrates including alumina, printed circuit boad and plastic such as polyurethane (Mylar). Gas sensing will be then performed towards various important gases such as ammonia (NH3), methanol, ethanol, acetone, etc. The gas-sensing measurements will be conducted by an amperometric technique and the standard flow through technique using the in-house developed gas sensing chamber with the computerized control system. For each gas, the gas-sensing perfornances including response, response time and selectivity will be fully characterized with different operating temperatures and gas concentrations. 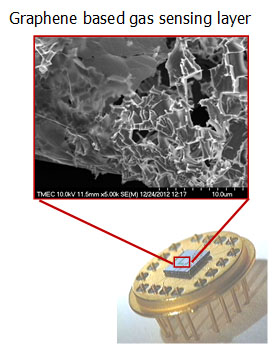 For electrochemical biosensing, graphene will be combined with biological enzymes such as glucose oxi-dase (GOx) for glucose sensing, cholesterol oxidase (ChOx) for cholesterol sensing. The enzyme will be immobilized with graphene on SPCEs by various methods including covalent linking, matrix linking with glutraaldehyde and polymer entrapment. Biosensing will be then performed by electrochemical measurement using CV and chronoamperometry. The detection performances including sensitivity, detection limit and dynamic range will be fully characterized with different buffer pHs, analyte concentrations, scan rates and detection potential for each analytes. In addition, interference will tested against important interferening species such as uric acid, acetalaminophene, ascorbic acid, etc.

The oxidation of 1 mM salbutamol on (a) GP-PEDOT:PSS and (b) PEDOT electrode and (c) SPCE electrode. Scan rate was 100mVs−1. Buffer solution was 50 mM phosphate buffer (pH 7.0).

For physical sensing applications particularly flex sensor (commonly used in glove sensor), graphene will be coated on a flexible substrate such as Mylar over a large area by various methods including screen printing and inkjet printing. An array of conductive electrodes will be then fabricated on the graphene layer by screen printing. The flex-sensing measurements will be conducted by the standard resistance measurement under controlled bending conditions. The flex-sensing perfornances including sensitivity, response time and maximum bending range will be fully characterized with different bending stess and srain.

For supercapacitor (used in mobile electronic devices), graphene will be combined with conducting polymer such as polyaniline by in-situ chemical polymerization. To evaluate the composite’s performance as an active electrode material for supercapacitor, paste of the material will be formulated and screen printed onto stainless steel current-collectors to form cathode of supercapacitor devices. The cathode will be assembled with spacer containing differnt electrolytes and stainless steel anode in a electrochemical test-cell. Cyclic voltammetry (CV), galvanostatic charge-discharge (GCD) and electrochemical impedance spectroscopic (EIS) measurements will be carried out using a commercial electrochemical workstation. Different electrolytes to be tested include H2SO4, Na2SO4 and ionic polymer electrolytes. The supercapactor performance will be fully characterized with scan rates, graphene concentrations and different electrolyte concentrations. 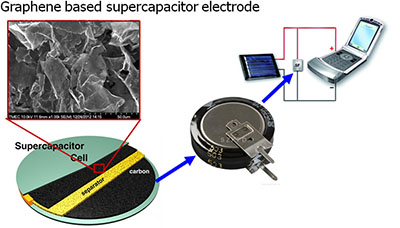 Illustration of graphene application in supercapacitor